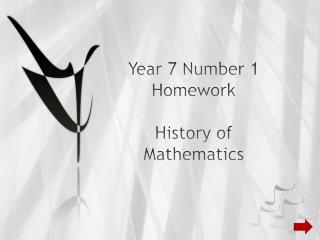 Year 7 Number 1 Homework History of Mathematics Mathematics did not just happen, it has evolved. For your first maths homework, you are going to look at one part of the history of mathematics. Choose a period of history from the next page and then select a suitable task(s).

Year 7 Number 1 Homework History of Mathematics - . mathematics did not just happen, it has evolved. for your first maths

Year 7 History Homework Project - How to set out your: tour guide of a medieval village'. you are going to hand in your

Homework Year 7 - . summer 1. week 1. william was convinced that one of the reasons why he had been able to conquer

Year 7 Homework Task - . electronics torch project. y7 torch. when you have designed your idea on paper trial it using

HISTORY YEAR 7 - . lesson one. what is history?. lesson objectives to know the definition of history to understand what

Year 7 ILA Homework - . properties of materials and recycling. homework objective 1 to be able to identify standard

Year 7 Homework 4 - - . by the end of the homework you will understand the properties and qualities of three smart

Homework Workshop Year 7 - . aims of the presentation. to help parents understand the role of homework in the curriculum

Year 7 Term 2 Week 1 Homework - P create a leaflet for a year 6 student that explains how to use commas, apostrophes

Homework Year 7 Project Learning - . produce a family timeline of events. start with your grandparents and finish with