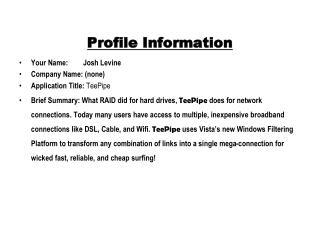 PROFILE - William mcintosh. february 12, 1825 . picture. profile where do you live? my plantations are lockchau talofau

Profile - . bharathidasan university, named after the revolutionary tamil poet bharathidasan, was established in the year

Profile - Global mould (hk) ltd is an american - chinese company based in the us, hong kong and shenzhen. we can provide