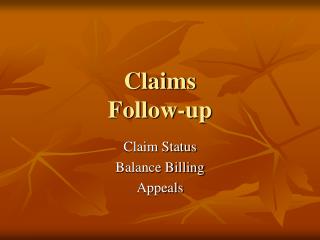 Claims Follow-up. Claim Status Balance Billing Appeals. Once a claim has been filed… . If there is no response within 45 days, contact the plan for claim status or mail a claim tracer form requesting status. There are four general claim statuses: Follow Up - . communication is key. call #1. before the prospect party you want to write down what you are going to say

Follow Up - . can one change the appearance of the alert/confirm/prompt box?. the default alert box can be customized (or

Follow Up Emails - . what should be i n the e-mail?. subject: thanks for your time (name of event) thank them for their

Follow-Up Evaluation - . the purpose of the follow-up evaluation is to determine the patient's outcomes from drug therapy

Reverts Follow-up - . dr.sabeel ahmed why-islam chicago. how this material came into being. research into quran &amp;

MasterCard Follow-Up - In july 2010, new regulations targeted at the financial services industry were signed into law.