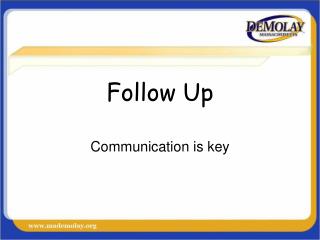 Follow Up. Communication is key. Call #1. Before the Prospect Party You want to write down what you are going to say Name calling about DeMolay tell the prospect how you got their name and phone number ask to talk the prospect directly, not his parents. Call #1, continued. Follow Up - . can one change the appearance of the alert/confirm/prompt box?. the default alert box can be customized (or

Follow Up Emails - . what should be i n the e-mail?. subject: thanks for your time (name of event) thank them for their

Follow-Up Evaluation - . the purpose of the follow-up evaluation is to determine the patient's outcomes from drug therapy

Claims Follow-up - . claim status balance billing appeals. once a claim has been filed… . if there is no response

Reverts Follow-up - . dr.sabeel ahmed why-islam chicago. how this material came into being. research into quran &amp;

MasterCard Follow-Up - In july 2010, new regulations targeted at the financial services industry were signed into law.