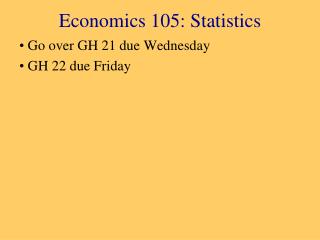 Economics 105: Statistics. Go over GH 21 due Wednesday GH 22 due Friday. Nonlinear Relationships. The relationship between the outcome and the explanatory variable may not be linear Make the scatterplot to examine Example: Quadratic model Example: Log transformations Chapter One: An Introduction to Business Statistics - . statistics applications in business and economics basic