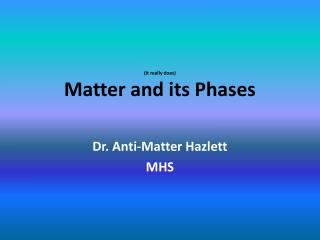 (It really does) Matter and its Phases. Dr. Anti-Matter Hazlett MHS. Inertia. To understand matter – you need to understand the concept of inertia This is the force(s) that keep something in rest The idea is based on energy This energy is divided into Kinetic and Potential XCell 180 Does It Really Works ? - The increased performance suggests that that every one of your body functions get

Pumpkin Peel, Does It Really Work - When you go out in the market of chemical peels, you won’t miss now the name of

Rogaine foam – does it really work? - Hair falls remains the number one cause of concern for people looking to maintain

Vita Luminance - Does it Really Works? - Pigeon cares for the babyis skin as only a mommy understands how! whether your

EGG FREEZING: DOES IT REALLY WORK? - For some young ladies wishing to postpone having a family, egg freezing may help

Celine Ageless Moisturizer -- Does It Really Work? - I think not though. this is the take-away: celine ageless

Glucoflow Reviews - Supplement Does It Really Work ... - For men struggling with urinating or performing in the bedroom,

Cannabis for Depression: Does it Really Work? - Interestingly, many who are suffering from depression are turning to

Glucoflow Reviews - Supplement Does It Really Work ... - For men struggling with urinating or performing in the bedroom,

Atheist fundamentalism? What is it? Does it really exist? - . fundamental – serving as foundation or groundwork for any

Sonus Complete Review - Does it really work? - MarketWatch - (market news bizz via comtex) -- sonus complete u2013 if you

Does It Really Need to Be This Way? - . what is digital data? some kind of physical property two stable states,

Citing your sources What does it really mean - . citing means that you tell your reader that certain ideas or parts in