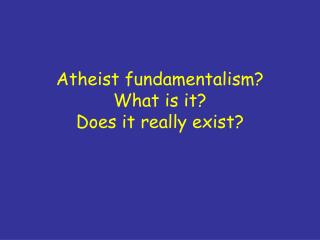 Atheist fundamentalism? What is it? Does it really exist?. Fundamental – serving as foundation or groundwork for any system. That which is essential/primary/necessary. Fundamentalist – (as a philosophy) OSTEOPENIA OF PREMATURITY - Icn – june / 2004 vilma i. dobbs, md calcium (ca) the most abundant mineral in the body

Interfacing Methods and Circuits - . chapter 11. introduction. a sensor/actuator can rarely operate on its own.

Ecology - . the first law of ecology is that everything is related to everything else. ~ barry commoner. warm-up. do

ABCT - Unit iii. abct. why do business cycles exist?. a quick review. people will always chose the shorter and most

From The 1981 book,  School, Work and Play (World of Tomorrow) - However, there is one kind of crime which may exist in

Chapter 21 - . genomes and their evolution. overview: reading the leaves from the tree of life. complete genome sequences

Moses &amp; the Red Sea Crossing - . truth or fiction?. did the biblical characters involved with the exodus really

Welcome to an Elementary Course on The Science of Self Realization - . the essence of bhagavad gita. day 1. contents.