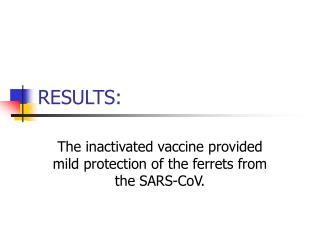 RESULTS:. The inactivated vaccine provided mild protection of the ferrets from the SARS-CoV. Results:. Ferrets were inoculated with a mock vaccine or with a formalin-inactivated whole-virus SARS-CoV vaccine. A booster immunization was given two weeks later. QUANTITATIVE SURVEY RESULTS - . for the board for certification in pedorthics march 5 - 6, 1998. quantitative survey

Module IV: Leading for Results - . a service of the children’s bureau, a member of the t/ta network. ncwwi leadership

Evaluation of IR Systems - . adapted from lectures by prabhakar raghavan (yahoo and stanford) and christopher manning