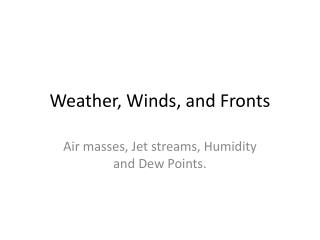 Weather, Winds, and Fronts. Air masses, Jet streams, Humidity and Dew Points. Wind Formation. Wind is movement of air from high to low pressure These differences in pressure are caused by the Earth’s tilt, orbit, and orientation to sun. Fronts and Weather - . chapter 15 section 2. what you will learn. differences in pressure, temperature, air movement, and

Weather Fronts - . the boundary between 2 air masses with different temperatures brings about a change in weather. warm

Weather Fronts - . concept 1: fronts are where active weather occurs concept 2: temperature is dependent upon the air

Weather Fronts - . air mass. a large body of air with properties similar to the part of earth’s surface that it covers.

Weather Fronts - . which type of front... 1 2 3 4. tap to reveal. weather fronts. fronts move counterclockwise around a

Weather Fronts - . part 2 mrs. nagrone. objectives. you will have the understanding of how air masses and the collision

WEATHER Fronts and Mapping - . terms. weather is all the conditions of the atmosphere, such as temperature, humidity,

Air Masses, Global Winds, and Fronts - . meteorology, weather and climate. meteorology is the study of atmospheric

Winds and Weather Assignment - 79 p ts. winds and weather assignment. 10 pts. global winds. the url of your activity is:

Understanding Fronts and Weather patterns - . grade 8 science menissian. air masses. an air mass is a defined as a