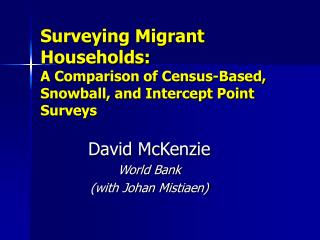 Migrant and Homeless Education: Teaming Up to Serve Our Kids - . session outline. what makes a student a migrant? what is

Surveys: What Are They? - . surveys: what are they good for?. a survey is a collection of questions asked repetitively to

Introduction to Surveying - . rics instces sst. rics considers surveying to be made up of seven specialisations.