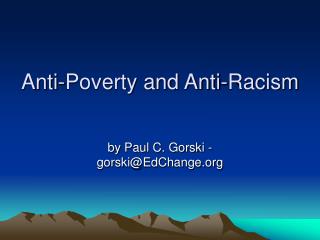 ANTI-POVERTY WEEK - . letter to the prime minister, state premiers and chief ministers by the leaders of religious

Anti-Semitism, Racism, and the Holocaust - . learning targets. i can explain the initial stages of the holocaust,

Poverty and Racism - . nate vomocil pio decimo center tucson, az. our mission. our mission as vistas is to eliminate

MSUM Anti-Racism Team Proposed Structure - . steering committee and all units will meet at least once monthly. each unit

Anti-Corruption and Anti-Fraud - How to deal with corruption and fraud beyond policies and strategies. p ractical

Anti-Semitism and Anti-Masonry - Doctors, medical professors and students in belgium during wwii: the connection of