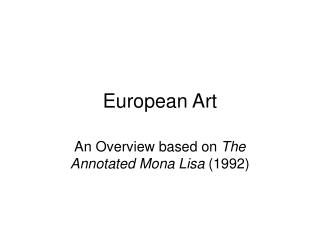 European Art at the Blanton - . what to paint?. in the 17th century, the european academies established a subject

European and American Art: 1920-1945 - . europe. • because wwi was fought on european land, it affected european

Master The Art Of Forex - The European - To be successful in the forex market, traders need a broker to facilitate

Flexicurity - State of the Art in European Research - . ton wilthagen and ruud muffels flexicurity: how can it be

Folk Art and its influence on European Culture - . the notion of folk art defines the creation that does not enroll in