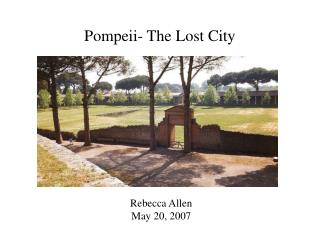 Pompeii- The Lost City Rebecca Allen May 20, 2007 The city of Pompeii is located near the Tyrrhenian Sea just southeast of Naples. It was a thriving city until 79 AD when Mt. Vesuvius buried it. From then on Pompeii was referred to as the lost city.

Lost City - By ted lewin. lost city. two minute edit. which of the word is a synonym for bare ? clothed 0pen inside

POMPEII THE DEATH OF A CITY - . your task is. to examine the remains of pompeii and think about what they tell us about

The Lost City Of Atlantis - . by: matthew sokal 6-100. some facts about atlantis. nobody knows what happened to atlantis

The Lost City of A tlantis - . written by alec. facts. *plato is the person who shared the story about atlantis (the

Pompeii - . by: drew w eider. basic facts about pompeii. the pompeii area was mostly destroyed by 16 feet of ash that