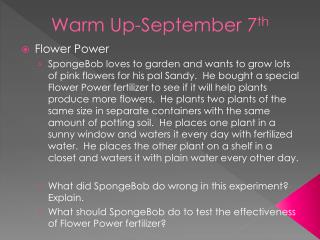 Warm Up September 19 th , 2013 - . write a theory that explains each element of the picture. (how the layers formed,

October 7 th , 2013: Warm-up - . please turn in your unit 3 vocabulary sentences. make sure your vocabulary word is

WARM UP # 7 - . what do you think? after watching the video clip, write a paragraph answering this question. what is your

Warm-up #7 - . where the mongols good rulers? why or why not? why do you think the mongols (yuan dynasty) fell ?. ming

Warm Up #7 - . what changes in europe led to the scientific revolution? what is the difference between a geocentric and

Warm Up #7 - . please answer in complete sentences describe an aspect of charlemagne’s rule in western europe. how did

Warm-up #7 - . name three causes and three effects of the crusades. how do you think that the crusades affected muslim

Warm-Up 7 - . identify each variable as the dependent variable or the independent for each of the following pairs of

Warm-up #7 - . why is tale of genji an important book? what does it tell us about life in heian during the golden age?.

Warm-up #7 - . read the mayan astronomy and calendar-making handout. then copy and answer the two questions below: how