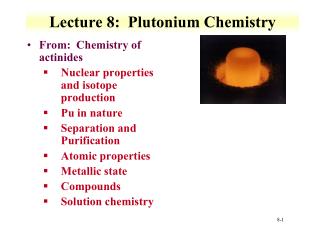 Lecture 8 - . more mental gymnastics tales from the history of science popper’s “solution” to the problem of

Lecture 8 - . fourier analysis. aims: fourier theory: description of waveforms in terms of a superposition of harmonic

Lecture 8 - . methanol. 1-introduction:. methanol is the simplest alcohol, and is a light, volatile (less than petrol) ,

Plutonium - . by layne bennett. information. plutonium atomic symbol is pu atomic number is 94 it is in the actinide

Lecture 8 - . 25/11/13. outsourcing . outsourcing has become increasingly popular as companies believe that it is more

Plutonium - . by : noah al khulaifi 7e. general information. its name is plutonium . its atomic symbol is pu . its