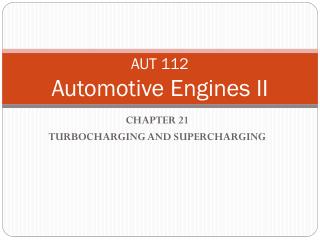 AUT 112 - . cpt 30 extract. blueprinting. the term blueprinting means that all of the components of an engine have been

Automotive Engines - . part 5 (induction). induction . the term “induction” applies to the pathway for fuel and air

Automotive Engines - . part 1 (configurations). configurations. based on arrangement and number of cylinders. engine