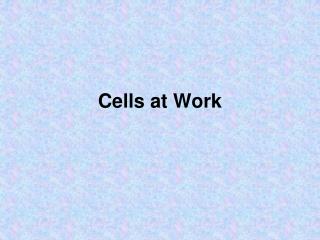 Cells at Work. Enzymes. Enzymes are organic catalysts which enable cellular reactions to occur in time spans which enable life to exist. The enzyme is not altered in the reaction and can be reused. Enzymes speed up reactions. Chapter 26 - . the synthesis and degradation of nucleotides biochemistry by reginald garrett and charles grisham.

AIM: How did Scientists discover cells? - Do now: list at least 3 cells in your body and explain their function. hw: