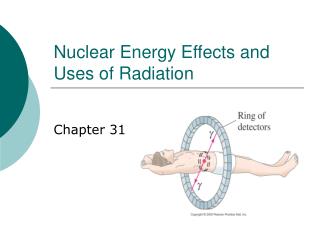 Nuclear Energy Effects and Uses of Radiation. Chapter 31. Nuclear Reactions and the Transmutation of Elements. Section 31-1. A nuclear reaction takes place when a nucleus is struck by another nucleus or particle. Nuclear Radiation - . nuclear radiation. nucleus has protons (+ charge) and neutrons (no charge). electrons are not in

Nuclear Radiation - . reference chapter: 22. some nuclei are unstable. they can change into isotopes or different