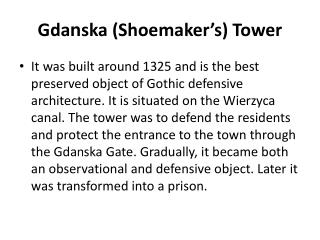 Spotted at Trump Tower - Who's been spotting visiting the

THE TOWER OF LONDON

The Tower of Hanoi

The Tower of Hanoi

Beyond the Pavement Patch - . applications of maturity testing for bridges, structures and pre-cast concrete. july 19,

The Shanghai Tower - . by lola, julie, and christian. where it is? it is in china. facts about it. construction started