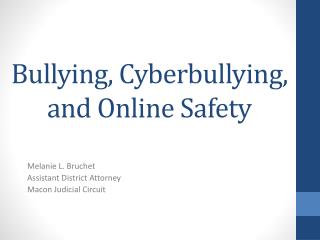 Bullying, Cyberbullying, and Online Safety. Melanie L. Bruchet Assistant District Attorney Macon Judicial Circuit. Bullying. What is bullying? A repeated aggressive behavior that is used to control or harm someone. What does bullying look like? CYBERBULLYING AND ONLINE SAFETY - Effects on our communities and what you can do to help. officer holly lawrence

Bullying and cyberbullying - . bullying is the act of intentionally causing harm to others, through verbal harassment,

Bullying and Cyberbullying - - . objectives. to promote awareness of the prevalence and consequences of : bullying

Bullying, Cyberbullying , and Harassment - . what does it all mean? what does this have to do with you?. what is

Bullying &amp; Cyberbullying - What is it? examples impact and support for students bystander effect prevention.

Cyber Bullying Cyber-Bullying Cyberbullying - . no matter how you spell it – it is always wrong. rosemary w. skeele

Cyberbullying - Bullying Prevention Center - The centers for disease control and prevention, the department of education,

Bullying and Cyberbullying … What’s My Responsibility? - . a guide for school personnel presented by kathleen conn,