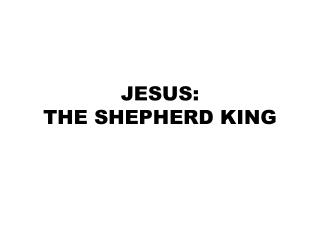 Jesus Christ is Risen! - . it is appropriate that we pause in our study of prophecy to talk about the resurrection of

“EVERY CHRISTIAN A SHEPHERD TO EVERYONE” - . basics of lay pastoral care and counseling seminar rev. joel s. aguirre,

The Call to Holiness - . the judgment of nations. jesus utilizes a story to help teach us the pathway to heaven. jesus

A Righteous Portrait of the King - Praise him! praise him! jesus, our blessed redeemer! sing, o earth, his wonderful love

Christ Jesus, The King - . his kingdom coming in and through our lives. christ jesus, the king. ps 36:9 in your light we

Christ the King - What on earth have you been banging on about in your sermons? three groups of questions:. christ the