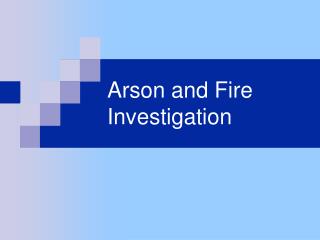 Fire and Arson Investigation Fire Patterns associated with Ignitable Liquid Accelerants - . “ one of the major

Arson Analysis of Fire - Arson is defined as purposely setting fire to a house, building or other property. arson is the

A Guide to Arson Investigation - . 1. what is arson?. arson is the crime of burning property - the burning of a building

Lecture Arson Analysis of Fire Debris - . arson is defined as purposely setting fire to a house, building or other

Vehicle Fire Investigation - . introduction. this presentation will address the trials and tribulations of vehicle fire

Arson - . the common accelerants. the most commonly used accelerants are petrol, kerosene, mineral turpentine and diesel.

ARSON - . objectives : discover what arson is and how it is investigated. do now : what is arson? fill out the video

Arson - Defraud insurance. arson is one way to defraud property insurancemaximum effort to hide nature of crimeperiod of