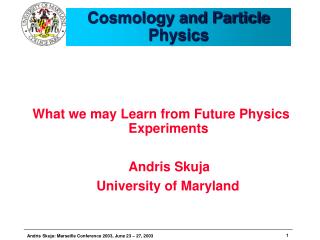 Cosmology and Particle Physics. What we may Learn from Future Physics Experiments Andris Skuja University of Maryland. Status of Particle Physics and Cosmology. The parameters of particle physics have been used effectively to construct the present Standard Model of Cosmology Introduction to Particle Physics - . dr. flera rizatdinova. high energy group at the osu. we have both theoretical and

Galaxies and the Foundation of Modern Cosmology - . islands of stars. our goals for learning : how are the lives of

String/Brane Cosmology - . cosmo 07 – university of sussex c.p. burgess. string/brane cosmology. …for those who have

CHAPTER 4 - . the wavelike properties of particles. schroedinger’s cat: “am i a particle or wave?”. wave particle

Triggering on Particle Types: Calorimeter and Muon Based Triggers - . sridhara dasu department of physics university of