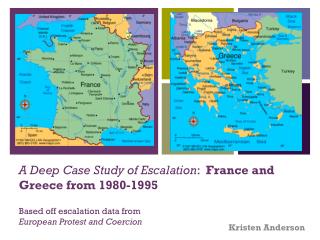 A Deep Case Study of Escalation : France and Greece from 1980-1995 Based off escalation data from European Protest and Coercion . Kristen Anderson. France. 3 general trends upward: 1981, 1986, and 1995. Number of protest/coercive events. Year. Demographics and other Contributions. Kristen Weber - The institutional analysis: a qualitative methodology for examining racial disproportionality and

Kristen Chadwick - Forest health protection is a group of technical specialists with backgrounds in forest pathology,

By: Kristen Cardinal - Dmx. by: kristen cardinal. dmx got his name from the dmx digital sound machine and he developed a

By: Kristen McColgan - Dr.seuss. by: kristen mccolgan. what is a character?. *characters- people represented in a story.

Kristen s Cookies - 2. examples of a process in service companies. processing an insurance claim for an

By: Kristen Day - . forests. forest resources. many products are made from the flowers, fruits, seeds, and other parts of

Boy Scouts of America - . director of youth protection mike johnson. this is who we are up against!. anna salter video.

European Contact Group in the Czech Republic - . gender and migration eva kavková 26.4.2010. contents. eks and its