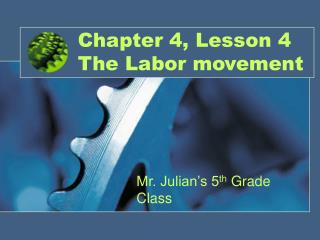 Chapter 3 Science, systems, Matter, and Energy - . easter island what happened?. what important lesson lesson can we

Chapter 14 - . labor relations and collective bargaining. chapter 14 outline. the labor movement a brief history of the

The Social Photography of Lewis Hine and The Child Labor Reform Movement 1880 - 1918 - . what was the nature and extent