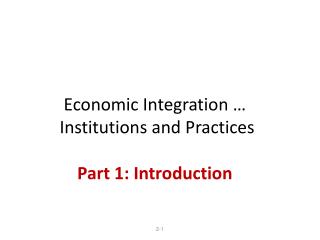 Economic Integration … Institutions and Practices Part 1: Introduction. Things you already know!! . It makes little sense for a country or a region to produce what it can buy from another country or region at a lower cost Sponsored or not to be Sponsored - . yasser tawfik. outline. part 1: introduction part 2: how to get a sponsor. special

3.1 Introduction - . in this chapter, we learn: some facts related to economic growth that later chapters will seek to