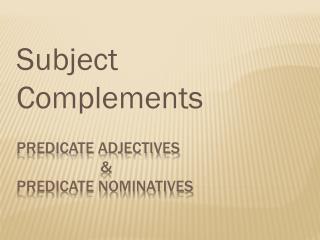 Subject Complements. Predicate adjectives & predicate nominatives. A word or word group that completes the meaning of a linking verb and that identifies or describes the subject The lemonade tastes sour . Mrs . Johnson is a dedicated teacher . CPSC 121: Models of Computation 2013W2 - . describing the world with predicate logic steve wolfman, based on notes by

Agreement in Inverted and Interrupted Order - . 3-14 p. 159. a sentence in natural order begins with the subject, which

Demonstrative Adjectives is ea id this, that hic haec hoc this - Ille illa illud that iste ista istud this,

Word of the Day - . malign definition – ( adj ) spoken ill of write a sentence using maligned draw a picture to

Latin Verbs - . i. overview we have learned that latin nouns and adjectives are put into groups with other nouns or