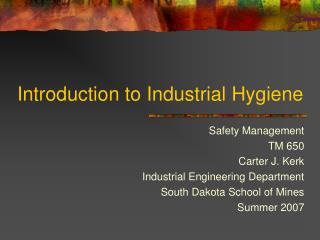 Introduction to INDUSTRIAL HYGIENE - . what is industrial hygiene?. the science of anticipating, identifying, evaluating,

Industrial Hygiene - . why is personal information collected?. your ih survey is part of the installation status report