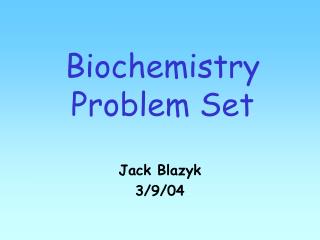 Biochemistry Problem Set. Jack Blazyk 3/9/04. Case #1. Lamont. Presenting Complaint. “I’ve felt so weak lately. Sometimes, I can hardly stand up, and when I do, I feel like I’ll fall,” muttered Lamont. History of Chief Complaint.

THE PROBLEM: THE HEART OF THE RESEARCH PROCESS - . the problem is the axial centre around which the whole research effort