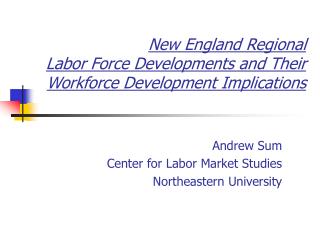 Labor Market Information for Workforce Development - . session goals. introduce you to labor market information and how

New Technologies and Their Implications for Experimentation - . what are these new technologies? rapid prototyping,

Developments in the Community transport policy and their statistical implications - . working party on transport

Regional Transmission Webinar Series NEW ENGLAND - . who we are and what we

The New England Regional Water Program - New england is one of 10 regions making up the 406 national water program, “