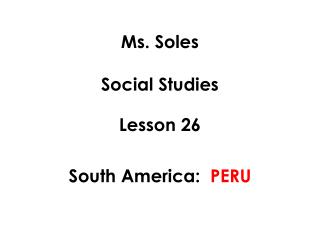 Ms. Soles Social Studies. Lesson 26 South America: PERU. Where in the world is Peru?. Flag of Peru. What will we learn about Peru ?. Physical Characteristics History Government Economy People/Culture Plants/Animals. Facts About Peru.

Social STUdies - . harnett county schools * grades 9-12. why do we want students to begin seeing things through a

All Things Social Studies - . social studies standards, curriculum, and testing in and beyond colorado. 2012 educating

Social Studies - . essential unit question: how did the ancient world contribute to the development of civilization?.

Welcome to the Scandinavian Cultural and Social Studies - . department of cultural sciences. art- and visual studies

Social Studies - . essential unit question: how did the ancient world contribute to the development of civilization? .

SOLEs for the Soul of Education - . an exploration of self-organized learning environments (soles). hopes for today:. we

Reading in Social Studies - . reading and reasoning in the social studies. gates of opportunity:. foreign languages.

SOCIAL STUDIES PROGRAM OF STUDIES 2014-2015 - . the following information is designed to help students and parents make

Social Studies: The Heart of the Curriculum - . dynamic social studies chapter 1. what factors contribute to a dynamic

Does your closet look like this? - . or this?. we need your help!. the canadian shoe charity. june has been designated

Social Studies Review! - . all third grade s.o.l’s (because we know it all!). help needed!!!. i am the social studies