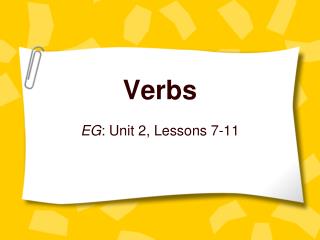 Verbs. EG : Unit 2, Lessons 7-11. SSWBAT:. Provide a clear, meaning-based description of action verbs that can be useful to students even if it is incomplete. Action verb description.

Transitive, Intransitive, and Linking Verbs - . so, you wanna know what they are? here goes…. transitive verbs. a

Tarea 9.2 - . verbs that change meaning in the preterite. 1 completar complete these sentences with the preterite tense

Deponent Verbs: Overview - . latin, like english, has two verbal voices : active and passive. we have learned that latin

Main Verbs and Helping Verbs - . © brent coley 2008 | www.mrcoley.com. in some sentences, the verb is one word . bill

Making Use of Gerunds - . lesson 23 joseph c. blumenthal. present and past participles, as we have seen, are forms of

Adverbs - . adverbs modify verbs adjectives other adverbs quantifiers and whole sentences. they answer the questions how?

Verbs - . verbs. verbs are a necessary component of all sentences. verbs have two important functions: some verbs put

VERBS - . by: alan s, alex m, and jordyn c. what are verbs?. verb - words that describe a person’s actions. running

Verbs - . verbs show the action of a sentence, or they can also be used to link words together. action verbs. action

Verbs - . click to add subtitle. type 1 date. what is a verb? brainstorm a definition. what’s a verb?. verbs express