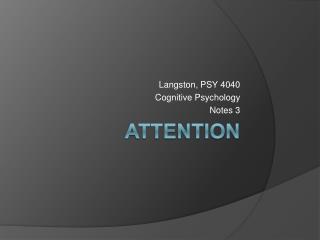 Attention - . what is attention? how does attention work? why do we need less attention for some tasks? why don’t we

ATTENTION! - . are you having mild fevers? swollen &amp; tender lymph nodes? a rash that begins on the face

Attention - . the meaning of attention. term attention doesn’t mean the same thing to all people we apply the term

Attention - . squire et al ch 48. can you elaborate more on statistical decision theory for control of movement by giving

Attention - . selective attention. debrief questions. list all the things you were hearing during your discussion. was it

Attention - . don´t manipulate the light microscopes, please. they are prepared for your work following presentation.

Attention - After changing your internet browser (proxy) settings, you can only access those web sites allowed/directed