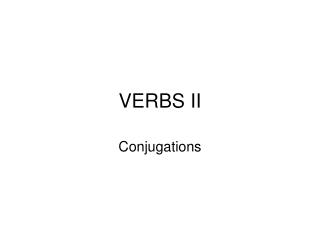 ATL II: Impersonal Verbs - . impersonal verbs are pleasing to me. . placet. you have seen the verb placet before. mihi

Verbs, Verbs, and More Verbs! - . everything you wanted to know about verbs but were afraid to ask! by mrs. marilyn

Linking Verbs/Helping Verbs/Being Verbs - . action verbs. the main word in the predicate of a sentence is a verb. verbs

Verbs, verbs, and nothing but verbs - . what is a verb?. a verb (from the latin verbum, meaning “word”) is a word

Verbs - . noor syakirah binti johari a134427. enter. what you should know when you study verbs. the meaning of verbs

VERBS - . action and linking. verbs can show action or state of being. examples: go (action), is (state of being) an

Verbs - . by: se ñorita mcmahon. what are verbs?. a verb is a word used to show that an action is taking place or to

Verbs - . we already know that verbs are doing words. so…. spot the verbs !. mr twit tied balloons to his wife’s

Verbs - . s1 literacy. learning intentions. i can identify verbs in a sentence. i can use verbs to make my writing more

Verbs! - . sharing stories lesson 3. verbs. most verbs show action. think of the things that you do: you smile, sleep,