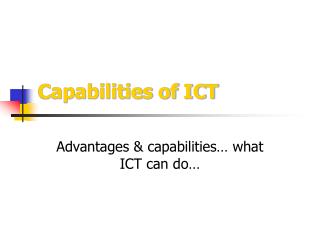 Planning Adaptive Interfaces [RWD Summit 2016] - In this session, aaron gustafson will explain the ins and outs of

Security Concepts and Capabilities - . the majority of these slides represent material that has been accumulated from

CANbus Solutions and National Instruments - . agenda. automotive test systems introduction to can can basics overview of

CHAPTER 4 - . evaluating a company’s resources, capabilities, and competitiveness. learn how to assess how well a

Implementing the Australian Curriculum: Explicit teaching and engaged learning of subjects and capabilities