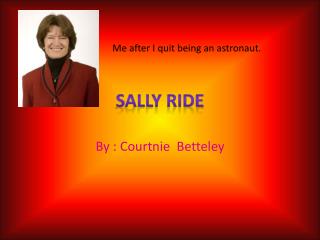 Me after I quit being an astronaut. Sally Ride. By : Courtnie Betteley. Me as an astronaut. Early Life Experiences. I was born May 26,1951 in Encino, California. Dale Burdell and Carl Joyce Ride are my parents. I had one sister ,her name is Karen.[Bear].