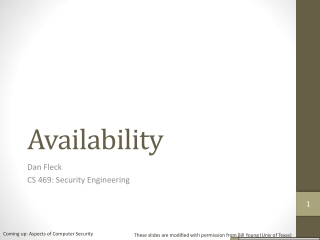 Availability. Dan Fleck CS 469: Security Engineering. 1. These slides are modified with permission from Bill Young ( Univ of Texas). Aspects of Computer Security. Recall that historically computer security has been deﬁned to encompass : Availability - . availability refers to the ability of a system to mask or repair faults such that the cumulative service