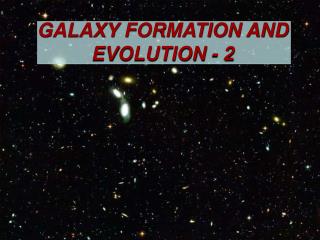 GALAXY FORMATION AND EVOLUTION - 2. DISCOVER Magazine’s 2007 Scientist of the Year. David Charbonneau, of the Harvard-Smithsonian Canter for Astrophysics (CfA), for his studies of alien worlds, in search of Earth-like planets, and the possibility that they may be hosting life. GALAXY FORMATION AND EVOLUTION - 1 - . the expansion of

GAIA Composition, Formation and Evolution of our Galaxy - . thanks to michael perryman, the gaia science team (present

Galaxy Formation - . collapse of an over-dense region of space (containing more gas and dark matter than average) under

Galaxy evolution - . why do galaxies come in such a wide variety of shapes and sizes? how are they formed? how do they

Galaxy Evolution - . the evolution of the cosmic star formation rate. when did it start / ramp up? when were half of