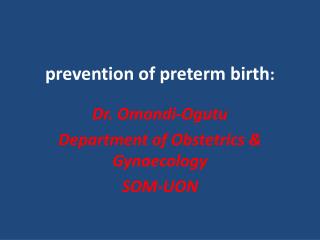 prevention of preterm birth :. Dr. Omondi-Ogutu Department of Obstetrics & Gynaecology SOM-UON. declaration. Conflict of interest- none Funding -none. PTB. Preterm birth is delivery before 37 completed weeks of gestation in the human species. background. Chapter 4: Prenatal Development, Birth, and the Newborn - . module 4.1 from conception to birth module 4.2 influences on

Resuscitation of the newborn baby - . learning objectives. to assess a newborn baby at birth to perform basic

Chapter 4 PRENATAL DEVELOPMENT AND BIRTH - . from conception to birth. phases of prenatal development period of the