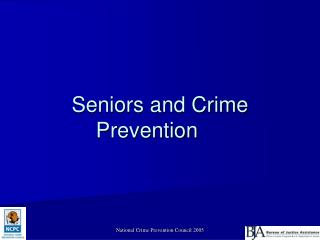 Chapter 3 Crime and Social Control - . “unjust social arrangements are themselves a kind of extortion, even

MI – Crime Scene Shark Bait - . name some of the factors/ concepts that are misrepresented on the tv crime programs.

Preventing Violence in the Workplace - . national crime prevention council 2007. a portion of this presentation is

Identity Theft and Strategies for Crime Prevention - . objectives. what is identity theft? why worry about it? how does

Why Crime Happens - . sociological theories of crime. before we get started…. what do you see? an elderly woman? a

Understanding the Criminal Justice System - Crime. what is crime?- different to different peoplea. society / system give