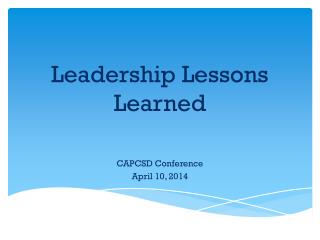 Leadership Lessons Learned. CAPCSD Conference April 10, 2014. Theory to Practice. -The Pragmatics of Leadership -To lead well is to move an enterprise forward with integrity, vision and a positive attitude using whatever resources at your disposal. Reframing Leadership. Leadership Lessons Learned From Geese - . fact #1. as each goose flaps its wings it create an “uplift” for the birds

Lessons Learned - . lessons learned. pc’s are only 10% of the challenge (support/networks/policies/train/expose)

LESSONS LEARNED - . and we are still learning…. people lessons. it takes a whole organization to make a social