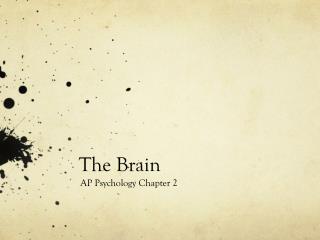 THE BRAIN - . the brain is quit a small organ, but has a very big job of controlling your body . facanating facts. the

The Brain - Day 4 pages : 236-242. the brain. how many neurons?. about 100 billion multipolar neurons innumberable nerve

The Brain - . think about it. start at the top. objectives. students will be able to describe the general structure of

THE BRAIN - . history. thousands of years ago, many effects of brain disease &amp; injuries were recorded  clues

The Brain - . brainstem the oldest part and central core of the brain, beginning where the spinal cord swells as it

The Brain - . carolyn r. fallahi, ph. d. phrenology. the idea that specific mental processes are located in, or

The Brain - . localization of function . language: 3 areas of importance. motor cortex- movement of mouth and tongue

The Brain - . enduring understanding : the brain is the control center of the body. the numerous sections of the brain

The Brain - . objective: list, identify and give functions of the major regions of the brain. human brain. remarkable

The Brain!! - . by: anna webster. everyday uses of the brain. the brain controls everything that we do. it’s unique

The Brain - . early studies. dualism the mind survives the death of the body? phrenology the bumps in your head

The Brain - . interesting facts. lower part of brain that connects to spinal cord is the size of your thumb! it controls

The Brain - . module 08. i. lower-level structures. brainstem, thalamus, and cerebellum. a. brainstem. the oldest part of

The Brain - . problems with the brain…. dementia – group of symptoms affecting intellectual and social abilities

The Brain - . accidents. phineas gage story personality changed after the accident. what does this tell us? that