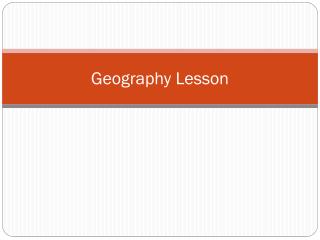 Geography Lesson 3 - . daily forecast. current events video lecture activity . question…. what do you need to get you

Human Geography Lesson 1 - . demographics. bellringer – page 11. what is human geography? use book pages 58-65 what are

Lesson 1: Geography of the United States - . geography the study of our natural surroundings and how we interact with

Lesson 9 - The Cost of Ignoring Economics and Geography - . adapted from middle school world geography: focus on