THE GOSPEL OF JOHN III. The Opposition to the Son of God (5:1–12:50) - PowerPoint PPT Presentation 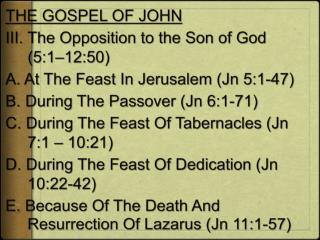 John 1:12 - 12 but as many as received him, to them gave he power to become the sons of god, even to them that believe

The gospel of John - . the gospel of john. open your mind expect to be challenged accept some mystery purpose of this

Gospel of John - . john 8. truth and freedom. announcements. john 8. part i. exegesis. a. icebreaker. b. questions. (to

Gospel of John - . major themes and characteristics: drama and unique words (e.g. logos, the word or the reason, john

The Feast of Tabernacles - . overview. the third of the great fall feasts on the fifteenth day of the month. commenced at

Gospel of John - . john 7. promise of the holy spirit. announcements. john 7. part i. exegesis. a. icebreaker. b.

The Son of God - . relationship with god character reveals god. “son of”. “ sameness” equality in some respect

Gospel of John - . “jesus did many other miraculous signs in the presence of his disciples, which are not recorded in

The First Epistle of John - . walking in the light. the gospel and the epistle. gospel of john. 1 st epistle of john.