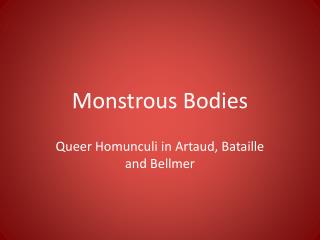 MONSTROUS MUTATIONS!!! - . what is a mutation?. mutations are changes in dna! however, these simple changes or mistakes

Monstrous Mutations - . genetics lab activity. types of mutations review. substitution a substitution is a mutation that

Monsters and the Monstrous

Bodies - . chris king eylem caner pei-chi wu. bodies. new media theory--- it has been accused of splitting off the body

CELESTIAL BODIES - . the term celestial body is as expansive as the entire universe, both known and unknown. topics.

Equality Bodies - . by berit vegheim, the civil rights foundation stop discrimination , norway. what kind of eb do we