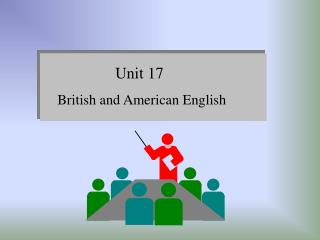 Angol célnyelvi civilizáció British and American civilization - . how to study? for two years in two lessons per week

Comparison of American and British English - . by: mária helebrandtová 3.g. british english ( bre ) is the form of

STANDARD AMERICAN ENGLISH - . there is no single, universally accepted standard for how to speak or write american

Unit Four - . how the values and principles embodied in the constitution shaped our american institutions of government.

Revision of unit 1 - . 8th grade. what is the nationality of the usa?. it’s american. what language do people speak in

BRITISH AND AMERICAN ECONOMY - . british economy. british is the 2° largest economy in europe it is a member of the g8

The Difference Between American English and British English? - . what is the historical reason why american english is

American English and British English – Same words different meaning - . are you sure you want to wear your vest over