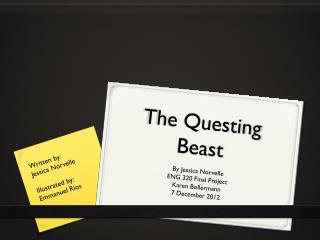 The Questing Beast. Written by: Jessica Norvelle Illustrated by: Emmanuel Rios. By Jessica Norvelle ENG 320 Final Project Karen Bollermann 7 December 2012. A long time ago in a land far, far away, There once lived a hound who loved to play. Questing in Life - . oscar yang lower east side preparatory h.s. reason for taking this class. learn to be a good digital

Taming the Beast - . word we talked about 2 fridays ago someone who consciously decides to support you because it is the

Nian The Beast - . by patrick walton. nian the beast was a gigantic horrible beast who raided villages on spring

“Tame the Beast” - . brought to you by. the right audience-ca closets meet sarah. there are 65,654 affluent adults in

Nature of the Beast - . animal representations in japanese edo artwork. what was edo in japan?. a time of peace after 200

Bella and the beast - . by katie lowe . once upon a time in a big mansion a mean old witch she cast a spell on the

Beauty and the Beast - . beauty is what you feel inside, and it reflects in your eyes. it’s not something physical. by:

Beauty and the Beast - . grimms fairytales. start reading!. once upon a time,. as a merchant set off for market, he asked

Beauty and the Beast - . by heather huntrods. exposition once upon a time there was a girl named belle. belle lived with

Beauty and the Beast

Ankylosaurs the armored beast - . by peem puvacharoen. why ?. i chose this topic ankylosaur because they are dinosaurs