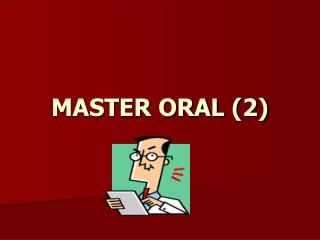 MASTER ORAL (1) - . what is the difference between bareboat and demise

Step 2: Oral Assessment - . perform an inspection of the mouth, teeth, and gums at each health assessment visit (required

ORAL LANGUAGE - . language…. has rules. is like a code. characteristics of oral language. 1. meaning 2. vocabulary a.

ORAL HABITS – Case 2 - . thumb sucking habit. the deformation occurring is as a result to 1) the finger or thumb