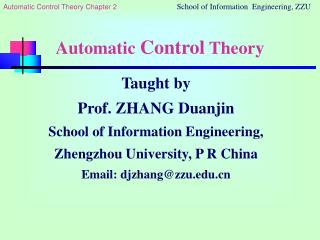 Automatic Control - . mike robinson. you can measure the distance from the rc car to some target . what could your

Automatic Lamps Control - . design the state machine to solve the next problem a customer is requesting a new

Control Theory - . d action – time delays. derivative action. when there’s too much oscillation , this can sometimes

CONTROL THEORY - . session 1 – the concept of feedback. which block scheme represents the level control depicted in the