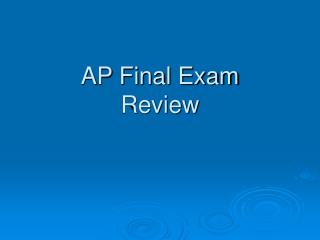 AP Final Exam Review. Harry Harlow Experiment. The young monkeys for the most part ignored the wire mother, even if she had food. They became strongly attached to the cloth mother, whether she gave food or not. AP Final Review - . part ii. i. french revolution. crisis of the french monarchy the revolution of 1789 the

Final Exam Review - . class: i really appreciated having the opportunity to share time with you and thanks for being in

Final Exam Review - . there was a general review of the chapters on optics and the equations from the first half of the